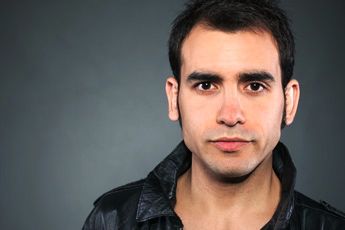 Vinz is from Napoli, Italy,a crossroads made up of many different mediterranean cultures. Growing up in Napoli meant growing up with the huge heritage of the neapolitan tradition; a unique voice comprising the sounds of Spain, the ancient Arabic chants and the powerful tribal rhythms of Africa. At the age of 10 Vinz started to play guitar and had the chance to study music with some of Italy's finest musicians.In the years that followed he worked as a session musician both in studio and as a live performer with many great Italian artists, as well as being involved in a number of other projects in a variety of roles that included composition, arrangement and production.

In 2008 Vinz moved to London and has since worked with many brilliant and original artists like Mysteries of the Revolution, Twisted Tongues, Sean O'Brien and Esther Dee. He also started working as an accompanist at The Place, Laban, London Studio Centre, GDA, Roehampton University, Pineapple Studio, and for Matthew Bourne's New Adventures and DV8. In April 2010 Vinz joined the Hofesh Shechter Company which he has being touring with worldwide for 2 years. He has performed with the company in venues including the Sydney Opera House, Theatre De La Ville(paris), Sadler's Wells (London).

In 2010 he started work as a film maker, producing video trailers and a full-length film for the Hofesh Shechter Company. During the summer of 2012, with Yaron Engler and Domenico Angarano, he created 'After They Left'. At present Vinz is active in London as a composer for dance, as a session musician, as a live performer for the Hofesh Shechter Company, as a film maker and is leading a number of his own projects.